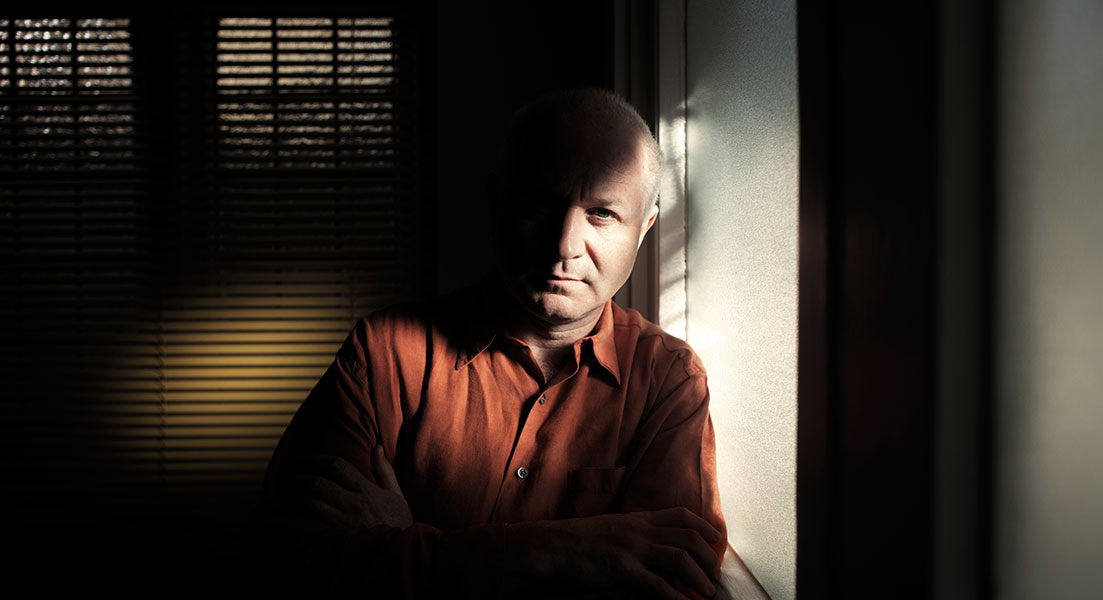 Journalists relish writing about a significant birthday: the challenge of distilling a life story—so far. I ask the soon-to-be-sixty Sir George Benjamin to whisk me back to the roots from which his international career and reputation would flourish. ‘Around the age of 7 or 8 I developed an almost fanatical enthusiasm for classical music,’ he remembers. ‘I started piano lessons and as soon as I’d mastered basic musical notation I began to compose, albeit in the most naïve way. Then I was asked to write incidental music for plays at school—sometimes for fairly large ensembles drawn from friends and fellow pupils. This gave an added impetus to my composing and let me hear the results of my efforts. That’s a very important step for an aspiring young musician.’

The early talent was nothing if not precocious. However, rather than leap straight to the engaging story of how he joined the great Olivier Messiaen’s Paris Conservatoire composing class, Benjamin insists on some backstory. He pays tribute to the man who introduced him to Messiaen in April 1976: the pianist and conductor Peter Gellhorn, a 1930s refugee from Berlin who had settled in the UK. ‘Peter taught me for several years before I went to Paris,’ Benjamin recalls. ‘He was a wonderful musician, trained in the great Germanic tradition—I believe his own teacher knew Brahms. But he was also a great enthusiast for modern music.’

As for Messiaen, Benjamin was the youngest-ever student to join his class, at the age of sixteen. ‘The moment we first met probably counts as the decisive day in my life as a musician. There’s no question he was the most inspiring and generous teacher imaginable and I recall my time studying under him with deep gratitude and emotion. We stayed closely in contact until his death in 1992.’

Studies followed at Cambridge University which again connected Benjamin to the Germanic tradition. His main teacher was Alexander Goehr, whose father—Walter Goehr—had been one of Schönberg’s most prominent pupils in Berlin. Goehr and Messiaen offered Benjamin complementary musical outlooks, as he explains. ‘Put very simply, perhaps Messiaen created revelations for my ear and heart, Goehr for my mind. In any case, I owe both more than I can express.

‘Messiaen’s classes were ablaze with the joy of sound. In analysis he concentrated on harmony, timbre, melody and rhythm—the perceptible stuff of music—all elucidated with the most profound poetic sense. With Goehr, things were more intellectual and, in a way, philosophical…concerning the nature of coherence in music, the role of polyphony, continuity and perspective in form. But this was also tremendously valuable. I’ve never encountered anyone else who could open up complete new vistas of musical thinking in just a few words.’

Benjamin first captured the attention of the wider musical public through the 1980 BBC Proms performance of his debut orchestral work, Ringed by the Flat Horizon. I well remember the spell cast on that occasion by this bewitching musical landscape, moulded by the BBC Symphony Orchestra and conductor Mark Elder. Benjamin describes that exposure as ‘…a dream come true for me. At the age of 20, it was quite an experience to have a performance in the giant arena of the Royal Albert Hall…broadcast live on BBC radio. But more than that, it was thrilling for me to hear my first orchestral piece played so beautifully.

‘The first performance outside the UK was given in Baden-Baden by the SWR Symphonieorchester, early in 1982. During my visit to attend the rehearsals and performance I was introduced to the composer Wolfgang Rihm. It was the start of a deep and enduring friendship.

Other indications of youthful brilliance soon emerged: for example, the 1982 orchestral piece At First Light, written for the London Sinfonietta and premiered under Simon Rattle’s direction. ‘This is maybe the most colourful of my early works and has remained the most performed.’ International recognition beckoned. That remarkable early virtuosity had its downsides, though. For a period, Sir George wrestled, it seems, with the sheer wealth of compositional routes available to a gifted and open-minded late-20th century composer. An intriguing predicament to be in. For a time, the very act of writing music was a struggle. As with many another composer, however, the encouragement offered by willing collaborators has been a career-long spur to activity. ‘The destination of my new works matters to me considerably,’ he says. ‘For instance, the Three Inventions for Chamber Orchestra was designed for Ensemble Modern. The opera Written on Skin was conceived for the Mahler Chamber Orchestra.’

‘In the last 30 years, whenever I write for solo keyboard I’m always aiming at the fingers of Pierre-Laurent Aimard, a very close friend since my earliest days at the Paris Conservatoire. All of my stage works were composed with specific singers in mind—their gifts, characteristics and idiosyncrasies directly influenced my vocal writing. This doesn’t mean other artists can’t present the same roles successfully, but the qualities of individual performers—or ensembles and orchestras—are a real source of ideas and inspiration for me.’

Another spur to compositional inventiveness has been the development of an extensive conducting career. The Berliner Philharmoniker, the Philharmonia, Royal Concertgebouw and Cleveland orchestras are among those welcoming his skills. At first, the invitations were to conduct his own music. In time, offers arrived to conduct complete concerts. Conducting, says Benjamin, is ‘…a wonderfully revitalising antidote to the prolonged solitude required for composing. Beyond my own scores, I relish having the opportunity to conduct a wide variety of works—those of my teachers, contemporaries, friends and even sometimes my students…alongside occasional forays into the standard repertoire. I learn something every time I work with an orchestra—not only about the subtle craft of conducting itself but about instrumental capacities and techniques as well…matters of no little use to a composer.’

Germany has long been receptive to Benjamin’s talents. In the most recent times he has been composer in residence at the Berlin Musikfest and the new Elbphilharmonie in Hamburg. His appearance with the Junge Deutsche Philharmonie is a third collaboration with ‘this exceptional musical institution’, as he describes it. A 2008 project involved an extensive European tour which celebrated the centenary of Messiaen’s birth as well as featuring Benjamin’s own Palimpsests. In 2011, the Junge Deutsche Philharmonie toured and recorded Benjamin’s Duet for piano and orchestra, with soloist Martin Helmchen under the baton of Lothar Zagrosek. ‘At every point,’ says the composer, ‘I’ve been hugely impressed by the high quality of musicians that the Junge Deutsche Philharmonie attracts and by their inspiring attitude to music, be it modern or old. I’ve been looking forward so much to returning to work with them.’

The construction of the programme for Sir George’s concert with the Junge Deutsche Philharmonie was a collaborative effort between conductor and orchestra. ‘Varied and colourful’ is how he describes it. ‘Most of the works I’ve conducted on numerous occasions—though not Dukas’ The Sorcerer’s Apprentice. This has a special place in my heart. It was featured in the extraordinary animated film #Fantasia# which I saw as a young child, an event which converted me to classical music in an instant. Also, it’s by my teacher’s teacher – Messiaen studied under Dukas at the Paris Conservatoire. So I feel a special, slightly sentimental, attachment to this piece.’

The concert is rounded off by another orchestral showpiece, Ravel’s second Daphnis et Chloé suite. In between come contrasting, leaner works by Ligeti, Stravinsky and Benjamin himself—his 2015 Dream of the Song. Work on this interrupted an immersion in operatic composition which has dominated his thinking in recent years, thanks in large part to the now 15 year-long partnership with British librettist/playwright Martin Crimp.

Scored for orchestra, countertenor, and female chorus, Dream of the Song was composed between the two large-scale operas Written on Skin and Lessons in Love and Violence. Says Benjamin: ‘This piece shares with those operas the use of the human voice, but Dream of the Song’s nature is poetic and reflective rather than dramatic. The main source of inspiration was the extraordinary Hebrew poetry from 10th and 11th century Andalucía. In English translation, this is given exclusively to the countertenor soloist and is combined with extracts from the late poetry of Lorca, sung in Spanish by a female chamber choir—on this occasion, members of the SWR Vokalensemble, a group for which I have limitless admiration.’

All in all, a concert befitting the composer’s birthday which follows a few days later. I ask Sir George whether reaching the age of sixty is prompting reflective self-analysis of his music. After all, retrospective surveys of his music have become almost commonplace on the international scene—during the last decade alone in San Francisco, Frankfurt, Turin, London, Milan, Toronto, Dortmund, New York and at the 2018 Holland Festival. Is it important to look back as a composer? Benjamin is reluctant to fully embrace that idea. ‘OK, a few weeks after this Junge Deutsche Philharmonie project, Radio France is featuring my music in its annual Présences festival. So as I enter my seventh decade (what a strange thought!) I won’t be able to avoid looking back at some of my older scores. But I prefer to face the future and tackle new compositional challenges which lie ahead.’